Government funding for public schools fell by more than $200 per student from 2009 to 2013 in real terms while increasing by over $500 per student in the independent school sector, new research shows.

The figures, compiled by public schools lobby group Save our Schools, cover the years leading up to the start of the Gonski school funding arrangements in 2014. Save our Schools convenor Trevor Cobbold said the figures show why both sides of politics should commit to funding the full six years of Gonski, where the biggest spending increases were scheduled for years five and six.

"Unless there is a national recommitment to the Gonski plan, it is unlikely that there will be any significant change in funding trends and the needs of disadvantaged students will continue to be ignored," Mr Cobbold said.

"The dismemberment of the plan by the federal government and several state/territory governments will see the continuation of the large gap in school outcomes between rich and poor."

The Abbott government says it will fund only the first four years of Gonski while Opposition Leader Bill Shorten has recently refused to repeat past promises to fund the full six years.

Federal government funding for public schools increased by $133 compared to $621 for Catholic schools and $521 for independent schools.

According to the authority, public schools received an average $11,864 government funding per student in 2013 compared to $9547 for Catholic schools and $7790 for independent schools.

When fees and other income sources were included, public schools had a net recurrent income of $12,548 per student compared to $12,117 for Catholic schools and $16,601 for independent schools.

A spokesman for Education Minister Christopher Pyne said federal government funding for public schools will grow by $1.9 billion from 2014-15 to 2018-19, a 36 per cent increase. This compares to a 23 per cent increase over the same period for non-government schools.

National Catholic Education Commission executive director Ross Fox said the Save our Schools report was based on "emotion and ideology, not the reality of school funding and the needs of schools and students".

"Analysis of Australian schools should focus on how to improve the learning and teaching for all students in every classroom rather than pitting school against school and sector against sector," he said.

Yvonne Luxford, executive director of the Independent Schools Council of Australia, said it was a "great pity" the report perpetuates the divide between public and non-government schools. (Ah, that's because there is a divide- a huge divide in your favour!)

Australian Education Union president Correna Haythorpe said: "This research shows that prior to the Gonski reforms we had a flawed system which did not direct funding increases to the neediest schools and students.

"We need Gonski to close those gaps in resources and ensure all students attend a school that can meet their needs."

Reports today of inequality in school funding prior to the introduction of the Gonski model highlights the damage that will be caused by the Abbott Government's decision to cut $30 billion from schools.

Before Labor's needs-based schools funding reforms, federal funding for schools was increasing through the front door, but some states were ripping it straight out the back door.

Labor's reforms put in place a roadmap to make sure state and federal governments worked together to increase funding and ensure schools had the resources to deliver a great education for all students - no matter the school, no matter the sector, no matter the state.

Shadow Minister for Education, Kate Ellis, said that through their cuts to education, Tony Abbott and Christopher Pyne have locked-in mediocrity, inequality, and an uncertain future for Australian students.

"The old school funding system was broken - the Federal Government was increasing funding while some states were cutting," she said.

"The Abbott Government is walking away from Labor's reforms just when they are needed most.

"Parents deserve to know their child will receive a great education no matter which school they attend, but under this Government this just isn't the case. Tony Abbott has no vision for our education system, only a plan for cuts.

"In contrast to the Abbott Government, Labor is committed to the Gonski principles and to sector-blind, needs-based school funding.

"Labor doesn't want to see a return to the divisive debates of the past - pitting sector against sector, school against school and parent against parent." 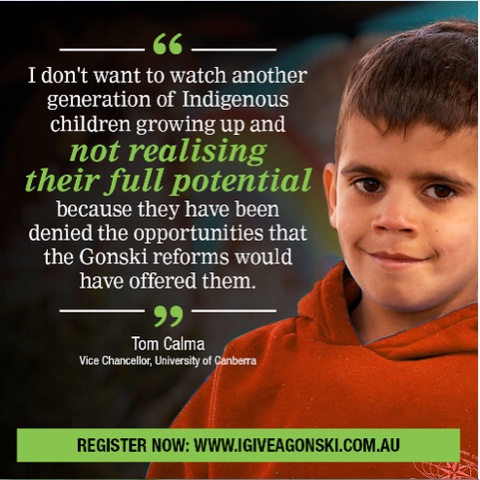 The NCEC says that the funding increases for Catholic schools reflects their needs and cites increases in students with disabilities and Indigenous students. Let it be clear, SOS fully supports funding increases for such students whether in public or private schools. What we object to is the discriminatory approach taken by governments whereby the sectors with a small minority of disadvantaged students received significant increases in funding while funding for the sector with the large majority of disadvantaged students has been cut. Enrolments of students with disabilities increased significantly in all sectors between 2009 and 2013, but it was only public sector funding that was cut.

We also object to governments providing funding increases for elite private schools that have none or very few disadvantaged students while public schools have their funding cut.

Finally, SOS welcomes statements by the NCEC that government funding for schools should be based on need. SOS would be pleased to work with the NCEC to ensure that future funding increases are directing at reducing the impact of disadvantage in education in both the public and private sectors and this can best be done by endorsing and working to improve the Gonski funding plan. The NCEC should be supporting concerted action to force the Abbott Government and Bill Shorten to commit to continuing and expanding support for disadvantaged students, irrespective of sector, not engaging in ham-fisted manipulation of the real funding figures. 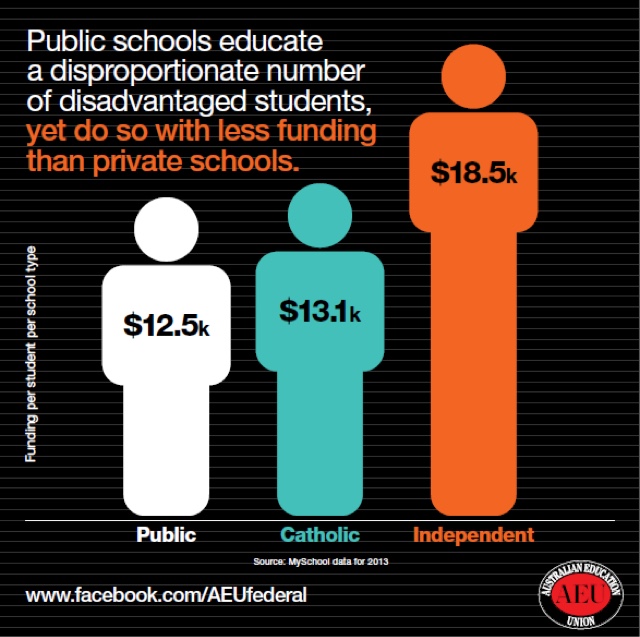