The bones of fearsome megafauna have been found in an undisturbed Aboriginal rock shelter dating back 49,000 years.

The find in the arid Flinders Ranges shows that not only were Aboriginal Australians settling the outback 10,000 years earlier than previously thought, they were also already using ochre, and bone and stone tools. 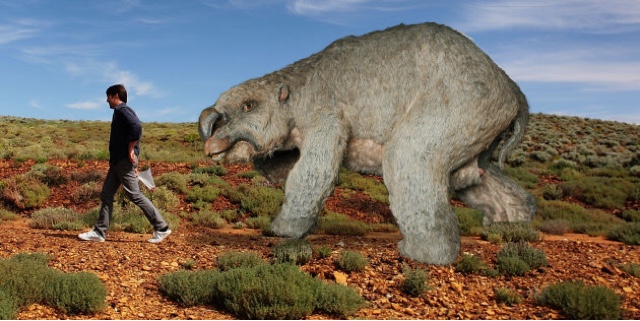 Above you can see a diprotodon optatum. It's almost four metres long and while it ate shrubs, we wouldn't want to take it on. After all, wombats can be pretty darn persistent when they want to take a bite out of you.

In the shelter, which is still being excavated, they also found egg shells from the Genyorni bird, which is shown to scale with a human below.

La Trobe University research archaeologist Giles Hamm told the ABC it was a surprise as previously, there was no strong evidence megafauna interacted with humans.

"We didn't expect it -- I had no idea," Hamm said."I thought it was originally a red kangaroo because I thought it was the thigh bone. There was no way we expected to find a giant, extinct megafauna in that deposit. We had never found that before in Australian rock shelter sites. It was quite an extraordinary moment."

Hamm said they'd only excavated one fifth of the shelter and had uncovered thousands of artifacts including this sharpened bone tool which is now Australia's oldest bone tool.