IThe grade 6 kids created an interactive card depicting the death of the evil witch doctor Gagool.
They did a good job of it. 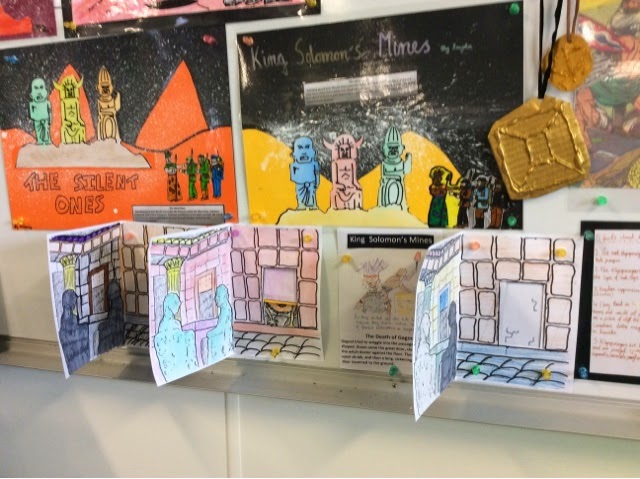 We finished reading James and the Giant Peach. ( First time I've actually read the whole book) We still have our paper mâché peaches to finish and a few other tasks next week. Below is a photo of our timeline which we were able to finish today.
I've decided to do a Roald Dahl unit with the grade 4s and I started reading The Witches. ( I forgot how deliciously scary it is.)
I found my old battered paperback copy of 'Born Free' last night which I'll read as a serial next week while we are finishing off work for King Solomon's Mines.( I remember seeing the movie at the drive-in when I was a very little boy. I wonder if the movie is on DVD? I know there are some interesting documentaries on YouTube we can look at.) 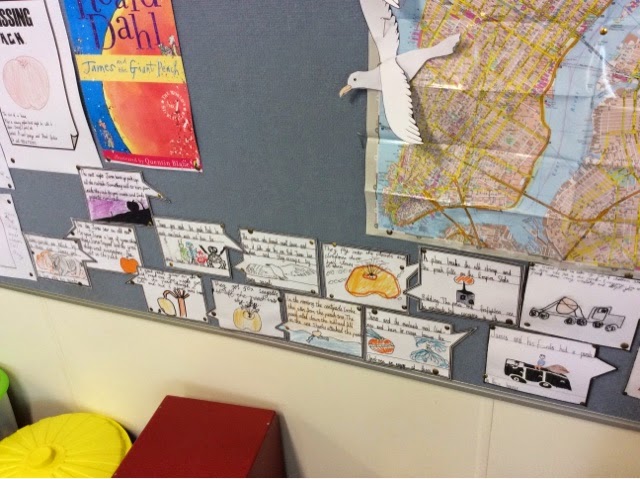 Another one of our spring bulbs has popped up.( below)
Apparently we were supposed to write our mid-term review comments this week and submit them ( No face to face mid cycle review discussions anymore?) I have a very busy day tomorrow so that will be an after school job to do.
We had a dead kangaroo on the road this morning ( Springs Road) so I will have to be careful driving to work early in the morning now that the weather is a bit warmer and our local roos are on the move. 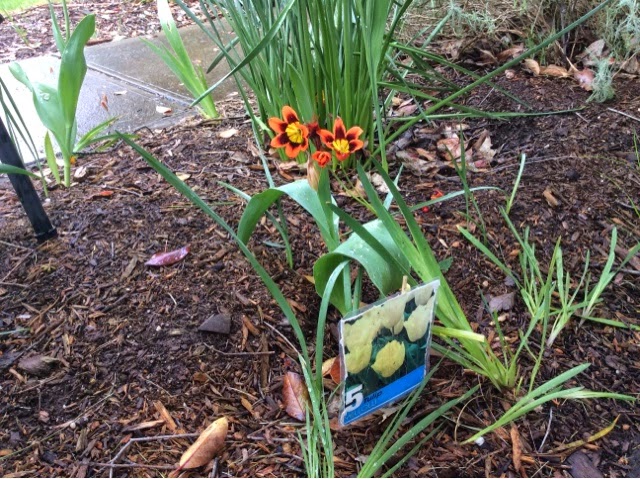 School uniforms increase equity and decrease bullying. But school choice is leading to significant upscaling of uniform costs at exactly the same time as the government removes financial assistance aimed at defraying those costs. The result will be sharply less access to our education system for those who depend on it the most.

Blazers, ties, cotton shirts and formal school dresses are starting to be part of the required "kit" and all of it is intentionally different to anything you can pick up at Kmart. This inevitably and significantly increases the costs of those uniforms.

At Glen Park we have deliberately kept it simple so that is not too costly. I know all too well how expensive secondary school uniforms are. I also know of a primary school locally that has become a secondary school campus and they expect the primary kids to fork out $400+ for a school uniform which in a state school is extraordinary.

Julia Gillard once said (as part of announcing subsidies for school uniforms) "having a uniform helps undercut the kind of unhealthy competition we can see at schools to have the latest, most expensive, fashionable gear". that is not always the case anymore.

Most Australian state governments maintain schemes aimed at defraying the costs of education incidentals (such as uniforms) for those who need it most. In Victoria, the scheme is ( or was ) the Education Maintenance Allowance or EMA which paid up to $300 per child a year to help with education costs. In 2014 the allowance was paid to a quarter of the state's schoolchildren (more than 208,000 kids).

Next year it will be paid to nobody because the state government has killed the allowance to save 40 million dollars ( I wonder if the Opposition will reinstate it if they win power? ) In 2016, the Coalition Government will cancel the SchoolKids Bonus, a similar scheme worth up to $842 per student a year.

Victoria also has the State School Support organisation ( Started by teachers during the 1930s Great Depression it relies on charitable contributions from school children and teachers to provide school uniforms for children in need.)

Read more: http://www.theage.com.au/comment/uniforms-a-weapon-in-the-school-marketing-wars-20141015-115n0a.html#ixzz3GHsIwc8H
Also check out this interesting story about 'corporate schooling' The latest fad from the US to impress Tony Abbott.
http://www.theage.com.au/federal-politics/political-opinion/corporate-high-schools-evidence-or-inspiration-20141016-116i3i.html
Inappropriate

The University of Sydney has launched an investigation into a professor who contributed to the national school curriculum review, after publication of details of inflammatory emails which included derogatory references to Indigenous people.

The poetry professor Barry Spurr described Tony Abbott as an “Abo lover”, and in another email wrote: “One day the western world will wake up, when the Mussies and the chinky-poos have taken over.”

Spurr’s public report to the curriculum review, and one of the private emails, argued Indigenous literature was too prominent in the English subject material.

The education minister, Christopher Pyne hurriedly moved to distance himself from Spurr. Abbott made no condemnation.

Labor described the emails as “disgusting” and “outrageous”, saying the comments called into question Spurr’s opinions on the national English curriculum. Surprise surprise Pyne says that his curriculum review has not been compromised even though it suggests playing down indigenous studies.

In his report, Spurr advised the government that the cross curriculum focus on Aboriginal and Torres Strait Islander peoples, the Asian region, and sustainability were “a distraction from the core work of the curriculum”.

In email correspondence Spurr went further, saying that “Abo literature” did not exist and was of no value to Australian students. this man should have played NO part in reviewing our curriculum.

Read more on the link below:

http://www.theguardian.com/australia-news/2014/oct/16/curriculum-review-expert-investigated-over-racially-derogatory-emails?CMP=ema_632
Posted by Unknown at 23:48