On Thursday night, October 30th, the Delacombe Junior Girl Guides celebrated World Teachers’ Day by inviting their school teachers to join them at a special Girl Guide activity.  The girls acknowledged the fantastic work performed by teachers and the massive commitment involved in running a classroom. It takes a dedicated teacher to spend time with their students at an after-school activity. 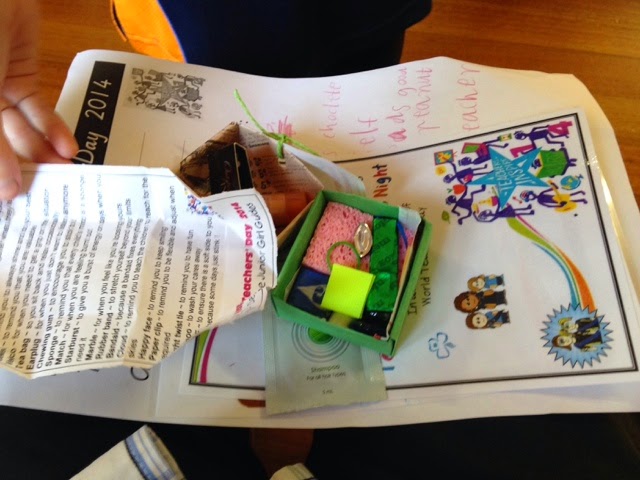 I was invited to an 'invite your teacher'night at the girl guides by one of my students who is a guide and had a great time. She made  a present for me for World Teachers Day tomorrow. Photo above.
Disgrace
Today DEECD released ( to the press) their Working 'Aspiring Learners, Thriving Communities' see:Aspiring Learners, Thriving Communities – a long-term approach to improving rural and regional learning outcomes
This document was dumped on us less than a week before the official election campaign begins. In April The Auditor General released a report  entitled ‘Access to Education for Rural Students.’ In his report he stated ‘Students in rural areas have for a long time not performed as well as their metropolitan peers. They face barriers to accessing education and that DEECD has not managed to overcome, and there is no sign that the gap in performance is likely to narrow. Indeed, in some areas of performance the gap is getting wider.’ He also said ‘Unless DEECD adopts a cohesive and targeted strategy, it is unlikely that outcomes will improve.’ DEECD was apparently developing a 'plan' to address this scandalous situation but the Auditor General said it was ' no game changer'. the plan was not released until now.
The document itself is short on specifics and details. It starts off with a lie by saying that 'Aspiring Learners, Thriving Communities is Victoria’s first consolidated effort to improve outcomes for learners of all ages in rural and regional areas.'( The previous Government released its Rural Education Framework in 2010 which the current government immediately scrapped)
There is no budget and no time line ( except that they say it is a 'long-term' strategy) and more importantly no one is identified as leading it. ( No name- no accountability) It is full of vacuous motherhood statements peppered with a bit of self-congratulation.( For what? Gutting TAFE, downsizing experienced staff, cutting important programs like reading recovery and merging regions into huge unworkable districts that cannot be properly serviced. This has had a particularly drastic impact on rural and remote schools.)
There is a lot of emphasis on video conferencing ( pity some schools, many like Glen Park that could use it have not been given it)
Releasing this document now is a disgrace.An incoming government should use it as a template for doing it properly and thoroughly. The Opposition's plans for new look Technical schools, direct support for disadvantaged students and their promise to re-establish the regions will help but they need to also confront this issue and make a commitment to act fast .( not wait 4 years) I have no doubt that this has simply been dumped out on the community so they can say to voters in their marginal rural seats that they are doing something when in reality doing nothing!
Posted by Unknown at 02:18