Below our watercolor pictures inspired by Fire on the Ridge and some kangaroo models. 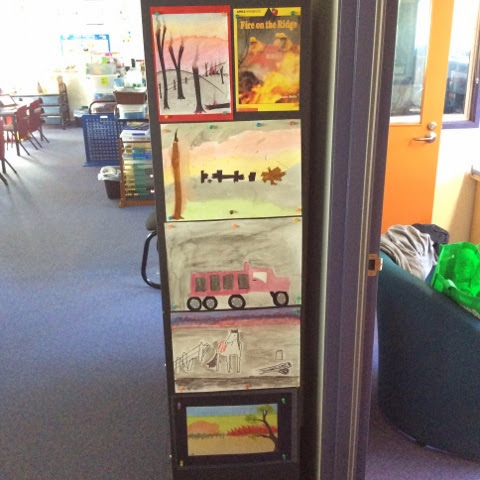 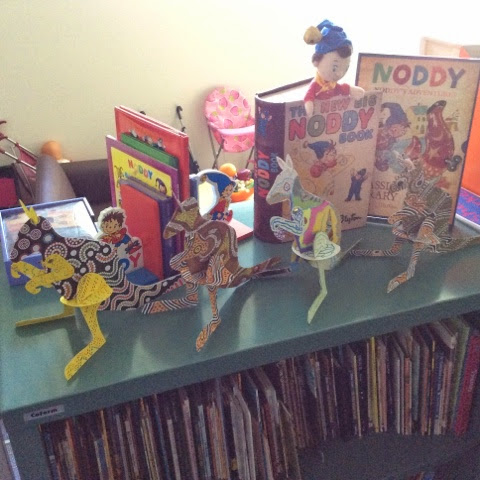 A Warning for DET about teacher stress

I wrote about this story when it first appeared in the media. this is an interesting follow-up to it.

A Melbourne school that was ordered to pay a severely depressed teacher more than $1 million has been forced into a second major settlement over claims of similar workplace mistreatment.

The new payout comes amid a spate of staff complaints to emerge against Werribee Secondary College, which has faced at least five WorkCover stress claims and three lawsuits from teachers alleging bullying and "burnout" after being given too many classes of badly behaved students.

The claims were the basis of a landmark lawsuit launched by former teacher Peter Doulis, who won $1.3 million last September after suffering a nervous breakdown and developing depression while teaching from 1998-2004.

The Victorian Supreme Court ruled that the school - which splits its best and worst-performing students into streams - breached its duty of care because it did not reduce the number of difficult classes Mr Doulis had to teach or support him.

Werribee Secondary is the only Victorian school to divide students into streams for all subjects based on their academic performance.

The model has driven up the school's overall academic performance and ATAR scores, but sparked concern among teaching staff that separating the "best of the best" also concentrated the "worst of the worst" into very challenging classes.

Mr Butyn declined to comment, but the Education Department said the latest legal claim to be settled related to past practices now phased out and "does not relate to current practices at the school".

"Teachers are given classes across levels and are not disproportionately allocated to any one level," a spokesman said.

"Teachers can no longer request to teach only one level."

The spokesman said the streaming model had helped Werribee Secondary establish itself as a "high-achieving school" and praised Mr Butyn for his work as principal.

"Under Steve's leadership, Werribee Secondary College has achieved an International Schools Accreditation and become the first government school in Victoria to offer the International Baccalaureate at Diploma Level."

We commenced the school year with a very positive meeting with the new Minister for Education, James Merlino. We discussed key priorities for the AEU including the whereabouts of the Gonski funding, investment in school infrastructure, principal workload, regional support and the performance and development framework. What is very apparent is the willingness and commitment of the new government to meet their election promises, to focus very strongly on education and work closely with the profession.

There are significant issues which need to be addressed across our school system after four years of cuts and neglect by the former government. This will obviously take some time however issues such as the changes to EMA and the missing Gonski funding mean that schools have been left to explain the changes to parents and are struggling to provide the programs you know students need.

I note with interest a recent report by the US National Bureau of Economic Research. It found that increasing school funding for children from low income families extends the child's education by half a year. It subsequently raises their adult wages by 10 per cent and cuts their chance of falling into poverty.

In Australia this was the intention of the Gonski review of school funding. It proposed a base funding level per student with loadings for disadvantaged students. We know our students are amongst the lowest funded in the country and we look forward to the government's investigation into the Gonski funding.

Another key concern we have been raising consistently over recent years has been principal workload and the lack of support from DEECD, due to significant cutbacks in regional and central offices and additional responsibilities through the 'enhanced autonomy' model. The Department finally responded late last year by commencing a limited workload study.

The AEU has been briefed recently on the findings of this study - the report won't be distributed, but will be used to continue the discussion about the work and support needed to address the workload concerns of principals, in which the AEU will be integrally involved. The Department will be presenting the findings of the report to our PCA Executive and Advisory group.

Victorians are ignoring the danger of leaving children locked in cars, with Ambulance Victoria revealing it responded to more than 200 cases across the state so far this year.

Paramedics say they are frustrated people are not heeding well-publicised warnings, and repeated their calls on Friday ahead of warm weather expected on the weekend.

"It's never OK to leave a child in a car, no exceptions, no excuses," Mr Drummond said.

"We have seen children die in hot cars in the last few years – just don't take the risk."

Ambulance Victoria tests have shown that on a 29-degree day, the inside of a car can reach 44 degrees within 10 minutes, and 60 degrees within 20 minutes.

On a 32-degree day, the temperature inside a car can soar to 75 degrees.

The weather bureau has forecast a top of 33 degrees on Friday, 35 on Saturday and 31 on Sunday.

Children can quickly become dehydrated and suffer life-threatening heatstroke in those conditions.

Mr Drummond said it was frustrating the message was not getting through to Victorians.

"There's been a significant amount of media coverage this summer to warn against the dangers of leaving children in cars," Mr Drummond said.

"Despite that, people are still willing to gamble with their children's lives."

Melbourne's east and south has recorded the most incidents, with 77 callouts in that region since the start of January.

The city's northern and western suburbs had 73 callouts in the same period.

It is a criminal offence to leave a child locked in a car, and penalties were increased last month from fines of $2165 to $3690, and from three months' jail to six months.

None of the children involved required hospitalisation, an Ambulance Victoria spokesman said.