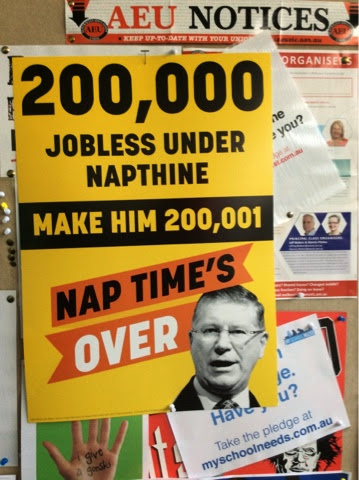 Education was front and centre of this election campaign. After 4 years of cuts from the Napthine Government totalling more than $600 million and after a long drawn out election campaign the voters have a clear choice to make about which party has the best credentials when it comes to reinvigorating state education which has been in the doldrums over the last 4 years.(For the past four years Premier Napthine and his Liberal/National Government have cut valuable programs and support in our public schools and TAFEs.)
The major parties raced to outbid one another and present a vision for the future of Victoria’s public schools and the children they educate.
The track record of the Napthine Government means it doesn't deserve a second chance.

The  Labor's Party has announced that it is committed to safely removing all asbestos from public schools by 2020.

They have made an additional commitment to provide an extra $100 million to escalate the identification and removal of asbestos in the short term will mean that some of the worst affected buildings, classrooms and portables will be made safer sooner. In a previous post I quoted a State Government audit that found over 300 Victorian schools were plagued with asbestos.

The AEU said today:"It is unacceptable that the Napthine Government has kept this information hidden during an election year, especially given the threat asbestos poses to health and safety. Asbestos is a dangerous material and its safe removal should be a number one priority in ensuring our children, families and school communities are safe."

She says that Labor's announcement demonstrates that they are listening to parents, teachers, principals and support staff and committing to tackling the problem.

"State governments must take responsibility for the safety of our community, and not expect school principals and staff to bear the weight of this responsibility alone," says Peace.

"Every Victorian child deserves access to education in up-to-date and safe buildings. Most important is the assurance that students and teachers' health and safety is at the forefront of the government's mind."