Christopher Pyne's bid to deregulate tertiary fees has suffered a major setback with the influential Group of Eight universities withdrawing support for any more compromises aimed at securing crossbench support.

The powerful coalition of Australia's leading universities, which has been a key backer of the government's proposals, said on Tuesday the federal Education Minister's original package to uncap tertiary fees is being watered down to the point where the compromises being made to secure hostile Senate votes is defeating the purpose.

CEO of the Group of Eight Vicki Thomson called for a depoliticised back-to-basics review instead of a third attempt to pass the legislation.

Read what Kate Ellis ( Opposition eduction spokesperson ) thinks about Pyne's challenges leading up to the next budget at this site: http://au.educationhq.com/news/15389/christopher-pyne-wants-to-be-a-fixer-he-should-start-with-his-own-demolition-work-on-school-funding/

I've been re-reading Edgar Allan Poe. During the break I'll start work on a unit based on some of Poe's best known stories.( The Fall of the House of Usher, The Murder in the Rue Morgue and The Pit and the Pendulum) 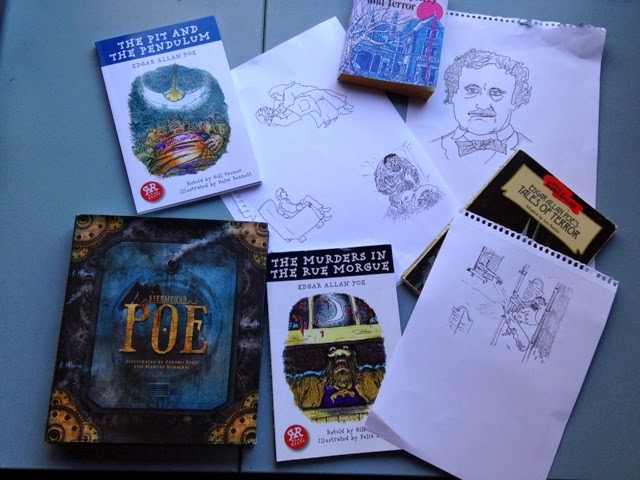 I've finished off my Around the World in Eighty Days unit over the last two days and also finished some work samples. It has been very smoky here over the last few days. 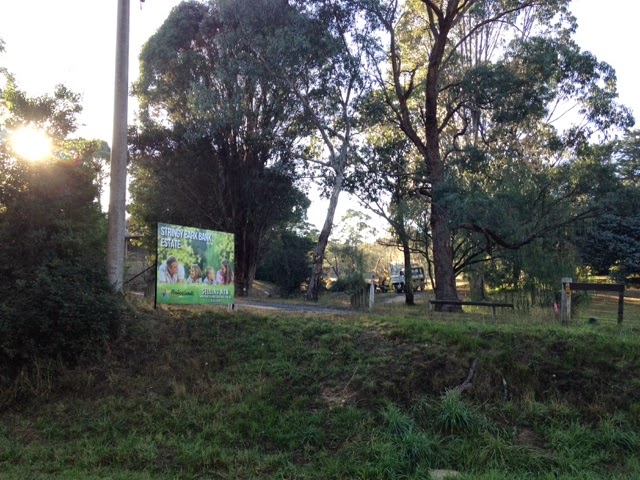 ( Department of Primary Industries burning off) This morning I noticed a sign on Springs Road ( one of those developers signs complete with a generic happy family photo on it.) and machinery busy at work where once there were houses. 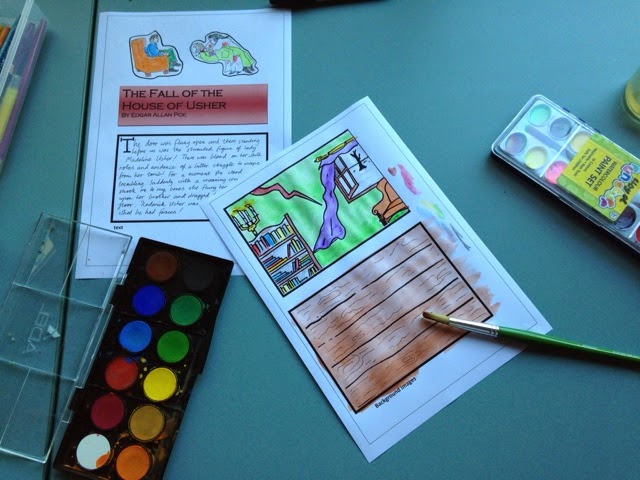 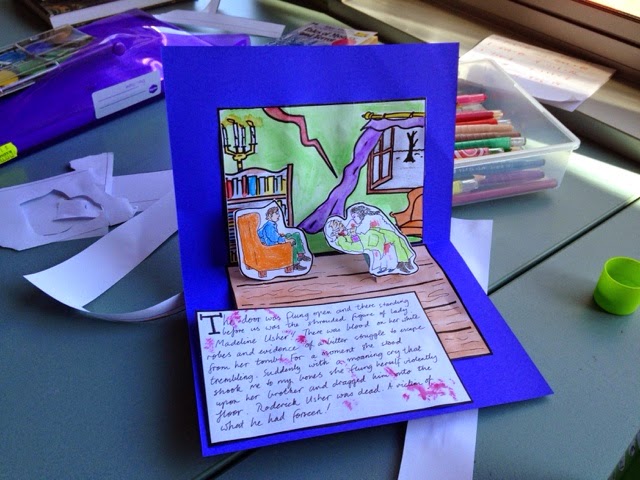 Pop up story for Journey to the Centre of the Earth 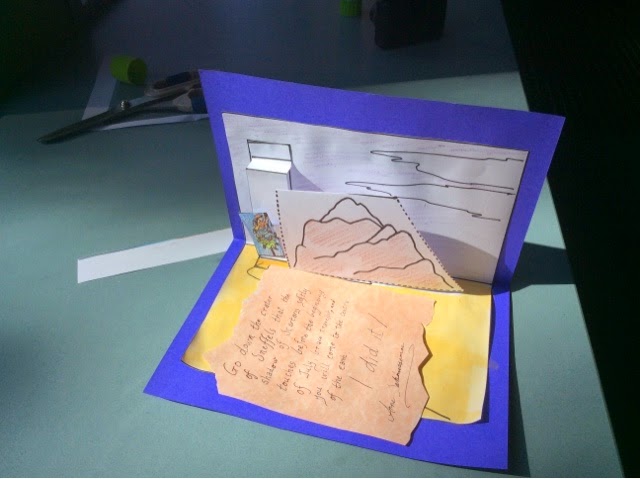 The school for asylum seeker children inside the detention centre on Nauru is set to close.

The building the students study in - within the Regional Processing Centre 1 camp - will reportedly be converted into office space, and a gym and recreation area for detention centre staff, while the children will be sent to Nauruan schools outside the camp.

The students, aged between five and 18, are resisting the closure of their school, which is set to hold its last lessons for the current term on Friday.

They have begun a letter-writing campaign begging the government not to shut it.

Guardian Australia has been told the school will close during the next term, which starts after Easter.

Students have written letters they will send to the Department of Immigration, to the company contracted to run the detention centre, Transfield Services, and to politicians, pleading for the school to stay open.

“In Nauru everything is boring except RPC1 school and we heard the school is going to close and they are transferring us to Nauru College,” one student wrote.

“We don’t like Nauru College because it doesn’t have good education.

“There are too many dogs in the college, not safety, dangerous, even there is no refugee children also not going. We don’t have enough facilities in there. Please don’t close the RPC1 school. The teachers are very kind with us.”

The toilets at Nauru College. Some asylum seeker children have written letters saying the school is unsanitary.

Immigration department staff and teachers on the island have raised strident concerns about the standard of schooling in Nauru, which is still recovering from the near-collapse of the entire education system in the early 2000s.

Between 2000 and 2005 schools barely functioned on Nauru, no exams were held and there was a mass exodus of teachers from the profession. While schools have improved, the after-effects of the breakdown are still being felt.

Schools are often in poor condition, classrooms are dilapidated and toilets broken.

According to the Nauruan Government while school is compulsory until age 15, truancy rates at some schools run at 60%, and 34% overall.

Already, when asylum seeker children are given a positive refugee status determination, they are moved out of the asylum seeker camp and obliged to attend a local school.

But, according to sources on the island, few of the 100-or-so school-aged refugees in the Nauruan community attend.

Most refuse to go as a protest against being held on Nauru, or out of fear of being assaulted.

The unaccompanied minor refugees have been especially targeted on the island. None of those boys attends school regularly.

“Realistically, the children’s education ends when they leave the camp,” an island source said.

“Most of these detainee children will not go [to local schools] as they fear they are going to a dangerous, unhygienic, and poorly-administered school.”

While most Nauruans accept the presence of refugee communities on the island, there remains a sizeable minority implacably, and in some cases violently, opposed to their resettlement.

Relations between local communities and refugees had shown signs of improvement over recent months, but have deteriorated in the last few weeks, with a number of violent attacks.

One refugee student wrote that refugees were afraid to attend school with local students.

“Their attitude is not suitable with [towards] us, even once they hit our friends in school. Sometimes some fights occur that they’re too dangerous and savage and that’s possible that someone else ... [who is] not involved gets hurt.”

The school inside the RPC1 asylum seeker camp is excellent, Guardian Australia has been told.

The school, which teaches students aged between five and 18, is well-equipped and staffed by Australian registered teachers.

The immigration minister, Dutton said of the school last week: “I went to the educational facilities, the classrooms there where young people at taxpayer’s expense are being provided with English classes and schooling otherwise that is of a standard that is at least as good as I’ve seen in Australia”.

Sources on the island questioned why the school was being closed if it was so well-regarded by the government.

The department of immigration declined to answer questions on why the school is being closed!

The minister’s office did not respond to questions, but a senior source in Canberra confirmed the school closure.

Education in Nauru relies largely on government and non-government aid from overseas.

The Nauruan government spends only 7.5% of total government expenditure on education, the second-lowest rate in the Pacific.

“Nauru’s small economy and limited private sector limits job opportunities for young people. Many young people lack the basic literacy and numeracy that enable them to compete for the limited public and private sector jobs available,” the Nauru government’s Women’s Affairs Department said in a report.

The European Commission’s country paper on Nauru says, “teaching and student learning standards are low”, while the United Nations, as part of its Millennium Development Goals assessment, says high truancy rates are the “result of perceived low value of education, due to lack of jobs”.