Today is labour day in Victoria. It recognises the working man's struggle for an eight hour day ( Eight hours of work, eight hour of liesure and eight hours of rest) the monument below was erected in Ballarat in 1880. 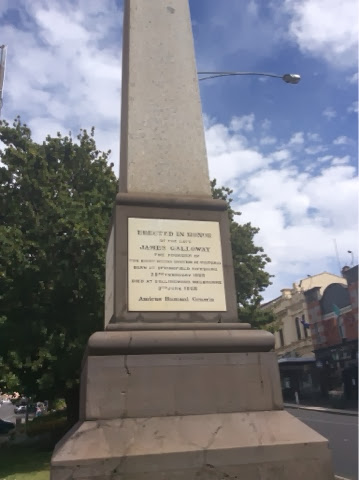 The working men of Ballarat erected this monument in honour of James Galloway, a Scottish stonemason, the founder of the 8 hour system in Victoria. Traditionally Melbourne claims Australian parentage of the Eight-Hour Day. Following agitation by Melbourne stonemasons in 1856 the eight-hour day was introduced in that city for workers employed on public works without loss of pay.

In February 1855 the Operative Masons' Society, which had been suspended in the confusions of the time, was resuscitated, and James Stephens with James Gilvray Galloway he formed a local branch on 4 February 1856 at Clark's Hotel, Collingwood. This meeting is seen as the genesis of the eight-hour movement, for a committee was set up to confer with the building contractors, most of whom proved co-operative on the introduction of the eight-hour day