From the ABC news online

One of Australia's largest providers of private vocational training, Evocca College, is facing a potential class action from hundreds of former students.

He will allege the private company breached Australian consumer law by providing sub-standard courses and using unfair marketing tactics to sign students up.

"I've been blown away by how many people have been forthcoming with their own experiences and their own claims of how they've felt they've been wronged by the school," Mr Kramer said.

Its business model depends on the VET FEE-HELP funding system, where private training providers receive government funding and students incur a HECS style debt that they are not forced to repay until they earn more than $53,000.

Figures released to a Senate Committee last month show just 32.9 per cent of Evocca College students graduated between 2011 and 2014.

Earlier this year the ABC revealed allegations from former Evocca staff and students about unethical practices and low graduation rates.

Two weeks later the federal government announced regulatory changes to the vocational training sector, including banning incentives to students like free laptops and tablets.( I wonder if our new minister will investigate further into the private training sector? I won't hold my breathe! Meanwhile TAFE is still struggling.) 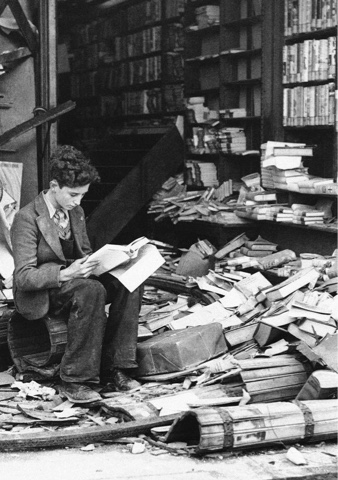 A boy sits reading a book from a bombed out book shop during the blitz.( Hopefully he wasn't shot for looting)
Posted by Unknown at 15:21