NEWSFLASH
TURNBULL RENEGS ON GONSKI FUNDING FOR LAST TWO YEARS
For the life of me I don't know why this is such a shock? Some people apparently thought PM Turnbull's close friendship with the man himself ( Gonski) would see the full, promised Gonski money flow through from the Commonwealth. I suppose they fooled some with his clap trap about innovation and thought a well educated country would be needed to deliver an innovative twenty first century economy......NOPE!
He had no intention of spending one extra red cent on state education.This is a disgrace but not a surprise.They are even peddling out the lie that the previous government hadn't funded the last two years. Of course they did, it is in the relevant  budget papers but again a government that is laying waste to our economy shouldn't be expected to be able to digest budget data!

Reaction and condemnation was pretty quick ( Twitter went into over drive with tweets from Jane Caro, Dee Madigan, Senator Wong, and Tony Widsor among others) Gonski people are saying that Turnbull is backing away from his Minister ( which might be why another one of them has resigned today) but the reality is that other for a few niche issues that are electoral poison he is a carbon copy of Abbott and he and Pyne had 'a special affinity for private education' not state education. There have been $30 billion of cuts to state education already, they will not restore any of it let alone invest new money!
Below is Kate Ellis's ( Opposition Education Spokesperson) response to the news

The Turnbull Liberals have used the Christmas-New Year period to lock-in behind Tony Abbott's legacy on schools - confirming they will dump the needs-based Gonski reforms and keep his massive school cuts.

This comes after two consecutive Liberal budgets have stripped $30 billion from our classrooms over the next decade.

"This just proves Malcolm Turnbull is every bit as bad as Tony Abbott when it comes to schools," Shadow Education Minister, Kate Ellis, said.

"Any hope that a change in Liberal leader would save the Gonski reforms and undo their school cuts is now dead.

"These reforms are a once in a generation opportunity to lift results and close the gap between our schools, by giving every student the individual support they need to achieve their best.

"We are already seeing great results - but without the final two years students will simply be left behind.

"Every student in every school will be worse off.

"The Liberals went to the last election promising an 'absolute unity ticket' on school funding - first Tony Abbott tore that unity ticket up, and now Malcolm Turnbull has set fire to it.

"This is a huge betrayal of parents who simply want to know that their child will get a good education.

"In contrast to the Liberals, Labor will go to the next election with a much better plan for the future for Australian students - a properly-funded, sector-blind, needs-based school funding model that is consistent with the Gonski reforms."

And the story from the Sydney Morning Herald this morning ( I love the bit where Birmingham blames the evil unions for how government's spend their education budgets. He is peddling the same tired old 'class sizes don't matter' nonsense as if he was David Kemp and it was the 1990s! Mmmm what are those class sizes in elite private schools. I know for a fact it is rare for them to get over 20 in primary and much lower in secondary!) 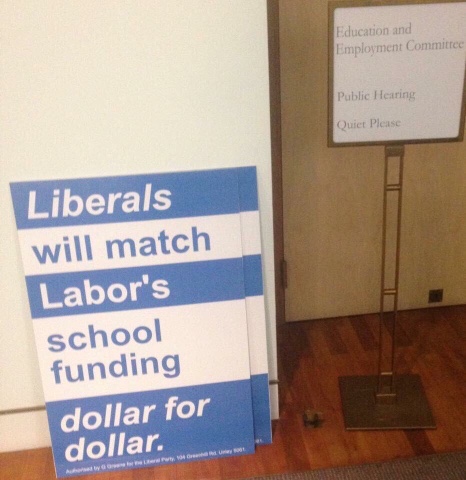 The Turnbull government will not fund the final two years of the Gonski school funding deals and will not compete with Labor in an election-year battle to shower more money on schools, Education Minister Simon Birmingham says.

The elevation of Malcolm Turnbull - a close friend of school funding reform architect David Gonski - to the prime ministership gave some naive people the hope that the government would fund the six years of Labor's school agreements.

But in an interview with Fairfax Media, Senator Birmingham said the Coalition would seek to strike fresh funding deals with the states from 2018 - the year two-thirds of the $10 billion funding was scheduled to start flowing.

Instead of handing out big funding increases, he said his focus will be on creating a simpler funding system that holds state governments accountable for how they spend federal money.

"I don't see much benefit for anyone if we dedicate two more years of funding just to create more uncertainty down the track," Senator Birmingham said.

"The previous [Labor] government's approach showed great largesse in tipping additional funding into the system, but they created a complicated model that lacks fairness and transparency.

"I want a school funding system that is genuinely needs-based and is targeting the money where it's most required."

Senator Birmingham said he supports the underlying principles of the Gonski model - which distributes more funding to schools with disadvantaged students - but that simply spending more will not necessarily improve educational outcomes.

The minister said he hoped to negotiate new funding deals with the states to last at least four years from 2018. These are unlikely to be negotiated before the next federal election, which is due to be held in September or October.

Labor is set to go the election promising big increases in school funding paid for by raising tobacco taxes.

"We won't be driven by what Labor will or won't do," Senator Birmingham said. "We will run our own race."

In a signal to the states to expect tough negotiations, Senator Birmingham said the federal government does not have a "limitless" amount of money to spend on schools. The budget update released earlier this month showed the Commonwealth deficit blowing out by a further $26 billion over four years.

Many states are in fact in a better fiscal position than the federal government, he said.

In a significant change from the Abbott era, Senator Birmingham flagged a more interventionist role for the federal government in schools policy, with new funding tied to specific measures such as giving principals more control over their budgets and improved teacher quality.

Previous education minister Christopher Pyne sought to strip out the "command and control" features of the Gonski reforms, saying he would not "infantilise" the states by telling them how to spend money.

"There has been a very significant growth in funding to schools but that hasn't been matched with a clear focus on improving school outcomes," Senator Birmingham said.

"If you are going to deliver extra funding into the education system, it has to be clear how the money will be used."

He said some schools have done "fantastic things" with the extra Gonski money such as employing speech pathologists and investing in phonics teaching.

"But some officials have said, 'We're not quite sure what we're going to do with the extra money, we're just going to employ more teachers'," he said.

The Turnbull Government has confirmed it will not be providing the funding for the final two years of the Gonski agreement saying that it became aware that this money was being wasted on the future of Australian children.

Reports indicate the Government became outraged when initial feedback revealed schools had been planning to spend Gonski funding on educational materials, teaching facilities and new construction instead of the initial plans to make sure the P&C fete is really off the hook.

The Turnbull Government has proposed renegotiation to take place as Gonski funding was originally planned to begin, declaring it time to reevaluate our expectations on education.

“We need to reexamine this agreement in great detail,” said Minister for Education Simon Birmingham. “We’re concerned that a lot of this funding is going towards the education of children that we’ve already pretty much written off. There are some real dead-end kids out there and our figures indicate it’s much cheaper to just forget about them.

“We need to make savings and the bloated and ritzy public education system is clearly the place to start. It’s time we stopped pouring money into schools that just spend it all on textbooks like a big bunch of nerds.

Sadly I can imagine them saying this! If you want to check out the planned (obscene)  excesses of some of Sydney’s ‘elite’ private schools check out this site: http://www.smh.com.au/federal-politics/political-news/simon-birmingham-dont-expect-schools-election-cash-splash-20151227-glvlpx.html which highlight  Sydney's most expensive school renovationsA group of Sydney private schools are planning to spend up to $200 million in building new facilities. 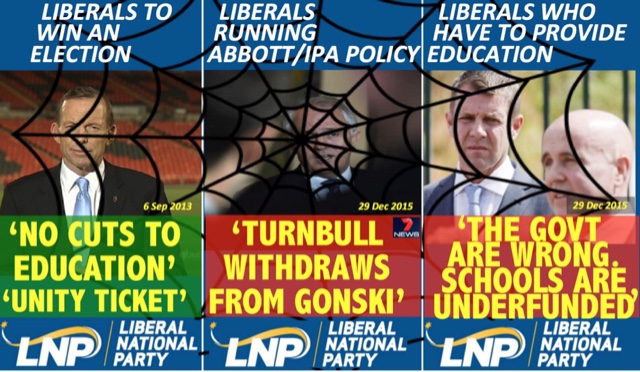