Twice as many voters in Liberal-held marginals seats would support the Turnbull government fully funding the Gonski schools package as those who oppose spending the extra $4.5 billion.

Polling of more than 6000 voters across 10 marginal seats, all held by government MPs, found 49.7 per cent of people would back the government reversing its decision not to fund the final two years of the Gonski agreement.

More people were unsure than actively opposed the government putting extra pressure on the budget bottom line by funding the outer years of Gonski (28.9 per cent versus 21.5 per cent).

The ReachTel poll, conducted last Monday on behalf of the Australian Education Union, could give Liberal and LNP backbenchers something to think about.

In Jason Wood's south-east Melbourne-based electorate of La Trobe, nearly 60 per cent of voters said the government should find the extra $4.5 billion compared to 16 per cent who opposed.

In Sarah Henderson's coastal seat of Corangamite just 15.7 per cent of voters opposed the full funding of Gonski.

But support split down party lines, with just 39.7 per cent of Coalition voters in Victoria in support, compared to 69.6 per cent of Labor voters and 79.1 per cent of people who support the Greens.

The Gonski reforms, which are supported by a majority of states, would add an extra $37.3 billion to schools over a decade in a bid to close the results gap between schools in different socioeconomic areas.

Despite going to the 2013 election promising a unity ticket with Labor on school education, the Abbott government announced in its 2014 budget it would limit school funding increases by linking them to inflation rather than the more generous Gonski formula.

Most of Labor's new long-term spending comes from reversing this decision and the party has pledged to reverse the $30 billion reduction to school funding over the next decade revealed by the Coalition in its 2014 budget.

"Needs-based Gonski funding targets resources to the schools that need it most, and is already making a difference in disadvantaged schools," she said.

"Malcolm Turnbull needs to listen and ensure he commits to the full six years of increased Gonski funding our schools need." 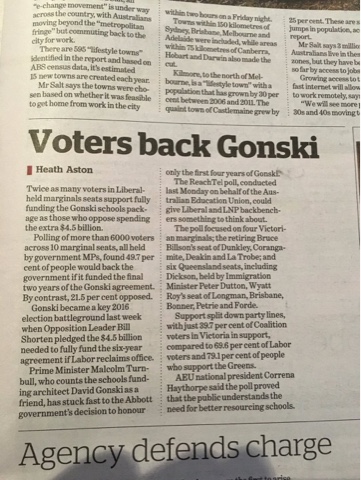