I remember talking about this with the kids a few years ago. We saw a photo of a fossil hunter lying down next to a femur bone ( the same length as he was) and of course that sparked off a measurement lesson and research into the largest and smallest dinosaurs. My wife and kids visited this museum when they were in the States recently but the display was covered up at the time.
From the Guardian

Paleontologists at New York’s American Museum of Natural History unveiled a cast skeleton of the world’s biggest dinosaur, a new species of Titanosaur, to a packed crowd of media on Thursday morning.

“There’s nothing like finding a great new fossil. Especially a big one, like this one,” declared Michael Novack, the museum’s senior vice-president.

The skeleton – fiberglass recreations of the bones, since fossils are too heavy to mount – is 122ft long, too big to fit entirely inside the Miriam and Ira D Wallach Orientation Center, one of the museum’s largest display rooms, so the dinosaur’s neck and head poke out 9.5ft into the room next door.

This species of Titanosaur is so new – it was found in Patagonia, Argentina, by a group of researchers from Argentina’s Museo Paleontológico Egidio Feruglio – that its name has not yet been released.

A scientific study on the species, which gives it a name, has been submitted but not approved for publication yet. If the name is released beforehand, it is ruled invalid.

Mark Norrell, the chair of paleontology at the museum, said he referred to it like all other dinosaurs in his collection: by its catalog number, in this case 32893.

Diego Pol, a lead paleontologist on the dig that found it, laughed when asked if he would be naming it Polosaur or something else based on his own name.

However, he did hint at what the name might be. “We want to honor the place and the family that hosted us in the field,” he said. The specimens were found in a desert near La Flecha, Patagonia.

It took seven expeditions over 18 months to excavate all 223 bones, with a new road being built to handle the trucks and equipment required.

“The most important and exciting thing is to be able, for the first time, to understand a giant dinosaur as a living organism. And you need a fairly complete skeleton to do that,” said Pol.

The skeleton cast on display came from 84 fossil bones from one specimen, which despite its height was only a teenager when it died.

Installing the dinosaur inside its new home was the most nerve-racking aspect for Norrell. The skeleton only just managed to fit vertically; the roof is 19.4ft high, while the top of the dinosaur’s back reaches 19.2ft. 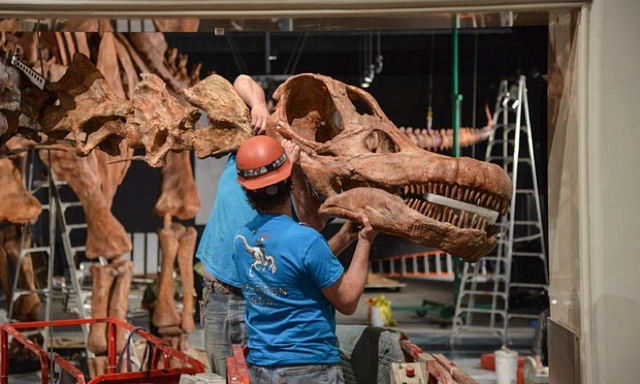