Well the 22 men and 3 women ( yeah, that's right) of COAG met today and as predicted by most political commentators the premiers shot down the PM's stupid idea about state income tax. ( the fact that he and his treasurer have a seemingly dis functional relationship and couldn't agree about whether the states could increase their tax and the truely  cruel and delusional decision that the commonwealth would abandon state schools but fund private schools had a lot to do with its rejection)
Almost on cue, the conservative premiers went into bat for the PM ( one of them has destroyed TAFE in his state and the other one squandered a mining boom and has left his state an economic basket case) and were even telling the media and the other premiers to stop dwelling on past broken promises! ( By that they mean Abbott and Turnbull's lies from the last election and their obscene 2014 budget) But it was a big victory for common sense and for the Victorian Premier who faced off against the PM and the PM backed down. Still no decision of education funding. That will have to wait until after the election. Turnbull is desperate to have the issue of education funding and the lies they peddled about Gonski at the last election neutralised for the next election. Sadly for them it will not go away but luckily their stupid idea ( not bold or 'pushing the envelope' but ill conceived and STUPID!) about funding state education through new state taxes has been shelved. 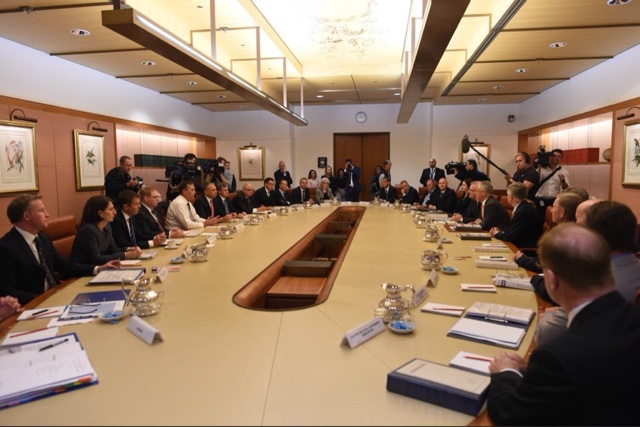 COAG, count the women....only 3.
An extract of an opinion piece from th Age about why children are Australia's greatest asset.

Kids from low socioeconomic backgrounds are our greatest untapped source of potential growth. They are our most undervalued stock.

Forget the minerals under foot, school kids are this country's most valuable resource.

Of course, a better quality education leads to higher private incomes for individuals. But diverting kids from a path of poverty also saves costs for society, in jobless payments, family support, mental health resourcing, and law and order.

A new report by Red Cross released on Thursday highlights the inefficiency and waste of spending $3.4 billion a year on prisons, when the money would be better spent on early interventions in highly vulnerable communities to limit crime in the first place.

There's no great mystery here. Disadvantage doesn't hide. We know where it lives.

It lives in communities with little access to jobs, dilapidated housing stock and high rates of drug abuse, family breakdown and youth crime.

Those postcodes are more likely to be remote, have low socio-economic status, high poverty and high concentrations of ethnic minorities.

Our pockets of disadvantage are hidden in plain sight.

Red Cross is calling for a proportion of the money that would otherwise have been spent on prisons to be spent on preventative community measures to address the root causes of crime – an idea called "justice reinvestment".

You can lock up the inhabitants. Or you can change the communities.

And a large part of the change comes by investing in high quality free education.

Which, of course, was the major finding of the Gonski report: that education dollars should be better targeted at those in need.

It doesn't mean spending taxpayer funds on kids who will do fine anyway. We don't need to spend money on overvalued stocks going to Cranbrook. Those kids will be fine. They are not at high risk of living lives of poverty, disadvantage, crime and misery.

Gonski recommended a new schooling resource standard, based on a minimum per student amount, plus percentage loadings for school size and location, low socio-economic status, low English proficiency and number of indigenous students or students with disability.

The Gillard and Rudd governments adopted the policy findings and promised the money. Abbott and Turnbull have turned their backs on delivering the last two years of funding.

In doing so, and in his new-found desire to have the federal government exit schools funding, Turnbull looks set to abandon the one area of policy that could fix all his other problems. Want to innovate? Educate. Want to create the jobs of the future? Educate. Want more tax revenue? Educate.

Investments in our human capital offer the best returns around.

Quite why Turnbull would choose to vacate this most powerful space for microeconomic reform is unclear. Perhaps he believes it's a policy area best handled by the states. But that displays a lack of confidence in his own level of government and a faith in state governments' abilities not matched by his recent rhetoric.

Investing in our most vulnerable kids remains the best social investment strategy around. Only a foolish investor would turn his back on it. 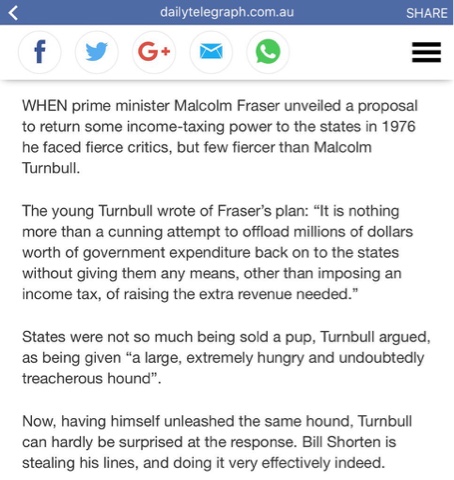