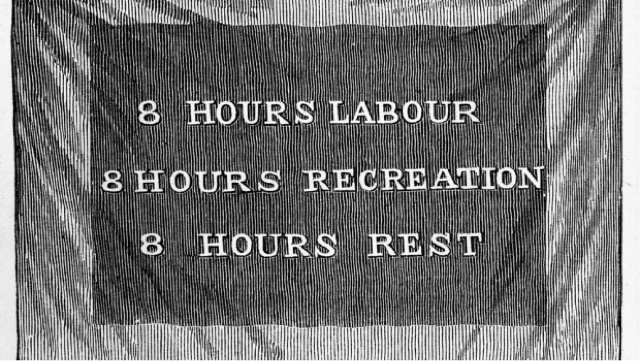 Do you have the long weekend off?

Are you celebrating with a sleep-in, or perhaps a romantic trip away, or brunch at a cafe?

If you have been lucky enough to have a break on Labour Day, then you have a group of brave stonemasons to thank for the holiday.

Celebrated in Victoria on the second Monday of March, it marks a win for better working conditions for the working class and 2016 is the 160th anniversary of this historic battle.

In the 1800s, conditions for workers were not great. The rights most Australians take for granted today – sick leave, holiday pay – simply didn't exist.

According to the Victorian Trades Hall Council, some workers in Sydney had won the right to an eight-hour day.

But most people worked for up to to 14 hours a day and had little job security.

On March 26, 1856, a meeting was held in the old Queens Theatre in Melbourne, pushing for Labour reforms. A man called Cornish, who was contracted to build Parliament House, resisted the move.

According to the State Library of Victoria, on April 21, 1856, a group of stonemasons – led by James Stephens– walked off the job at Melbourne University. They marched to the Belvedere Hotel in Fitzroy, with other stonemasons joining them along the way. They ended the march with a banquet at the hotel.

Later, talks with employers led to a peaceful agreement that stonemasons would work eight hours for the same wage as they previously were paid for 10 hours.

The success of the campaign was celebrated on May 12, 1856, with a march from Carlton Gardens to Cremorne Gardens in Richmond, followed by dinner, speeches, games, festivities and fireworks.

According to the Victorian Trades Hall, the eight-hour banner first used on that day was made by Caroline, Elizabeth and Isabella Vine. It read: 8 HOURS LABOUR, 8 HOURS RECREATION, 8 HOURS REST.

Known as the Eight Hours Procession, the march became a major event in Melbourne and was held annually for the next 95 years. It became a paid public holiday in 1879.

In 1934, the holiday was renamed Labour Day.

The last Labour Day parade was held in 1951, and in 1955, it was replaced by the Melbourne Moomba Festival parade.

So, go on then – have one (break) on the stonemasons.