Things didn't go too well for Cardinal Pell today. His own testimony condemned him.
The story below is from the Sydney Morning Herald, there is more to come.
Gasps of disbelief in Rome as Cardinal Pell says that Gerald Ridsdale's abuse of children at Inglewood was a "sad story and it wasn't of much interest to me".

"There is a saying in the church … that those who know don't say, and those who say don't know."

Cardinal George Pell's words. Not mine.

If Pell did know in the 1970s and '80s about the paedophilia of disgraced priest Gerald Ridsdale and was complicit in exposing him to more children, the cardinal was not saying so on Tuesday.
But in 90 minutes of testimony from hell, Pell's own words betrayed him. 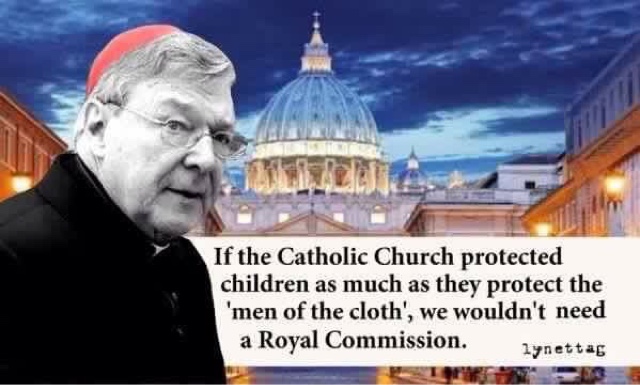 Pope Francis and others must surely now recognise the damage Pell's presence is doing to the church along with those millions who trust it and accept all the other good work it does.

Almost 40 years ago Pell was a consultor to the then bishop of Ballarat, Ronald Mulkearns, who made the final decisions on shifting the paedophile Ridsdale around.

"Consultors had an obligation to be as well informed as could reasonably be expected. I'll leave it at that."

Pell's words, not mine.

Did consultors have an obligation to keep ears and eyes out to properly advise the bishop?

Pell's answer, not mine.

"It's a sad story and it wasn't of much interest to me. The suffering of course was real. And I very much regret that. I had no reason to turn my mind to the evils that Ridsdale had perpetrated."

Pell again, not me.

The counsel assisting, Gail Furness, asked Pell: Who is responsible for the children?

My emphasis, not Pell's.

What, I wonder, should we make of what they can? Is it really what they choose to do in the context of blissful ignorance and loose lips sink ships?

After signs of reconciliation on Monday, the cardinal reverted to denial in his first 90 minutes of testimony on Tuesday.

We have reached a turning point.

From where I sit, as a non-Catholic of Catholic origin who just wants the church to come clean, help the healing of the victims and ensure these crimes never happen again, Pell lost so much credibility in those 90 minutes as to make it impossible for objective, understanding people to empathise with him.

It is difficult to conclude anything other than Pell made gross errors of judgment.

It takes a village to raise a child. No caring person could countenance a culture of silence about dangers to children, no matter work ambitions, ideology or duty to an institution like the Catholic Church.

Yet Pell was inclined to believe priests before children who alleged abuse. He says he did not hear what was common knowledge about deviant priests. He cannot recall what specifically was discussed at two meetings about Ridsdale being moved on, but says for certain that paedophilia was not mentioned.

Christians rely on teachings more than 2000 years old. Yet Pell claims common responses to child abuse in the 1970s were so different to what they are now as to, in my reading of it, excuse the approach of some church leaders.

And different levels of caring for kids?

"Under canon law, you can identify direct levels of responsibility."

And shifting responsibility for caring onto others who might still lie to you, as Pell claims Mulkearns and fellow consultor Leo Fiscalini did to him?

And why would Mulkearns choose to lie to you?

"He would realise that I didn't know and he did not want me to share in his culpability. He would not have wanted to mention it to me and at least some other consultors because we would have asked questions about propriety."

Royal commissioner Peter McClellan asked Pell: "If we were to come to the conclusion that you did know about Ridsdale when he was moved, then you would be culpable too?"

What the cardinal didn't say is that he at the very least should have known then about Ridsdale's paedophilia when advising the bishop.

If the cardinal did not know, then he is culpable for deliberately remaining ignorant in some deluded belief that it would help the church to which he has committed his life. If it was not wilful ignorance, then Pell is culpable for not making sufficient inquiry about Ridsdale given he knew in general terms there were "problems" and "difficulties".

From what we have heard, Pell failed to fulfil his responsibility as either a priest or a human being. He has never admitted anywhere near as much. He would be well advised to do so on Wednesday, for the sake of the church and his role in it, not to mention the victims of Ridsdale and countless others who deserve to find healing.