David Gonski has been interviewed recently on ABC 24s One to One program
Here is an extract from that program:
The Gonski report concluded that school funding must be shifted towards a needs-based funding model, which his review estimated would require an additional $5 billion of Commonwealth revenue per year to sustain. The current Federal Government has disowned the commitments made under Gonski's plan, but he denies he feels bitter about the decision. "I don't feel bitter at all," he said. "I feel — in my opinion — that we put out a very good document. "Some may disagree, but I don't hear many people say it was a bad document."
Mr Gonski said although the review was a "wonderful" thing to write, he cautioned against a view that presupposes such reviews are prescriptive or dogmatic. "It was — if you like — a concept," he said. "I think we did our job within the terms of our reference." With the benefit of hindsight, would he have changed the content of the report? "I've thought long and hard — were there mistakes that we made?" he said. "It's very easy to say other people made mistakes. "It's much harder to diagnose a mistake you've made yourself. "I think a clever person, and really, a good business person, would have said 'give them the cake-mix, but don't give them the egg'.  "Because basically, they may be more interested in working it out and going out to get there [themselves] — to make the cake — than if you just put it on their plate."
In the latest saga in the education-funding debate, a Government discussion paper floated the idea of making wealthy parents pay to send their children to public school.  The proposal was quickly rejected by the Government. In his trademark dulcet style, Mr Gonski agreed. "Excluding or potentially discouraging children of wealthier people from public or government schools I don't think is the comprehensive-type approach that I would encourage," he said. "I'd love to see government schools filled with all manner of people. "We want to encourage people to have choice."And their choice is that the government will provide an education which hopefully — if you follow the suggestions that we put up — will be very good." 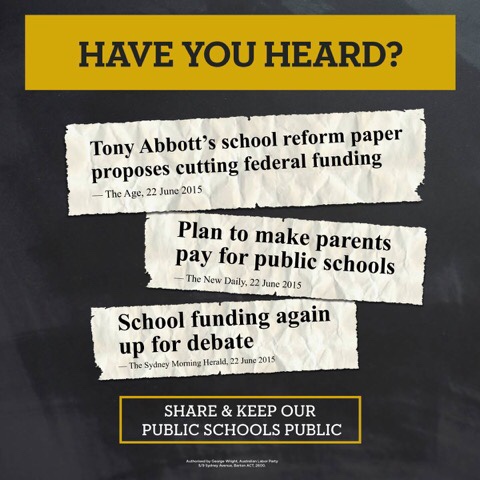